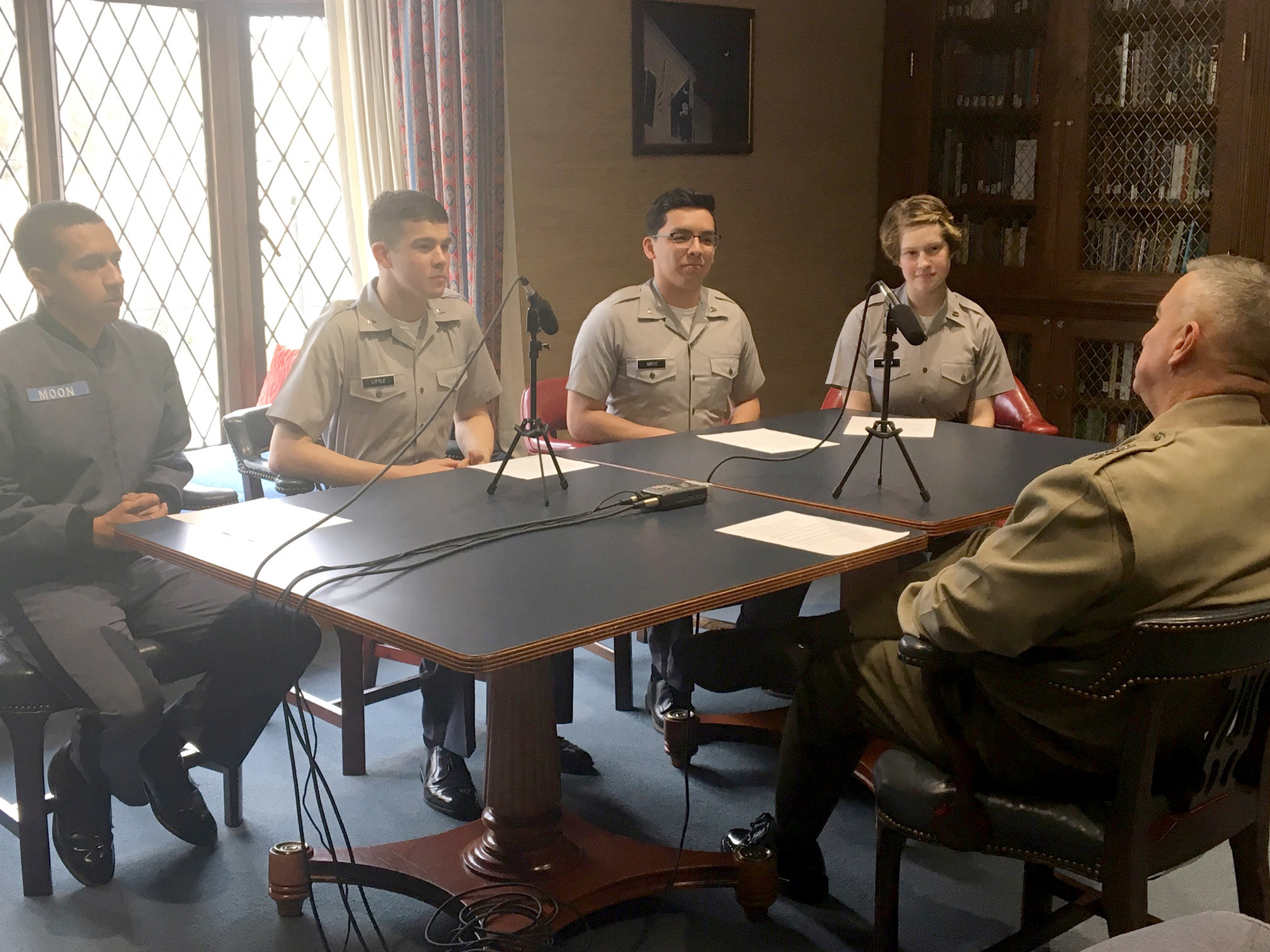 Museum Club members Tristen Moon, Sam Little, Richard Greve and Shiloh Smiles sat down with General Walters for an interview about his own cadet experience, aviation stories, and leadership advice.

When asked about the day that Walters arrived on campus as a knob in 1975, he said that what really struck him was the “smell of young men in brand new cotton uniforms, and sweat.” Walters said that the most difficult thing that first week was trying to sleep. “I had no air conditioning. I think the upperclassmen got fans, but as knobs we weren’t allowed to have fans; so if there wasn’t a good breeze coming off the Ashley River, or your room didn’t face the right way ... you took a while to get to sleep. But by day two or three you were tired enough that when sleep was available you took it.”

Asked about his cadre, Walters said, “One thing you’ll find is after you graduate you’ll remember who trained you no matter what battalion you’re in. You might never see them again for twenty or thirty or forty years, but when you meet them again you’ll remember them just the same. Despite the fact that they might not have any hair now, you’ll remember them because they’re the ones who, if they did their jobs right, set you up for success.”

Of differences in the barracks to today, Walters said that with the exception of electronics and air conditioning, there haven’t been a lot of changes. “When I matriculated down here in August of 1975, there was no such thing as a cell phone, there was no such thing as calculators. We used slide rules - calculators started coming out in mass towards my junior and senior years. When I got down here you got your information from the newspaper or from the TV - which you didn’t have in the barracks. All your education happened in the classroom and in the library.”

Walters said that Recognition Day today is much more symbolic than when he was a cadet. Back then, it was held in the barracks. It was “fast and furious” with a lot of PT. Afterwards, cadets would go to the Beach House for an oyster roast or a barbecue.

Of his academics, Walters said that he would study on weekends to prepare for the week ahead. The fourth class system taught him how to allocate his time to accomplish tasks, and made him realize that you can accomplish more than you thought you could. “I don’t think I could have successfully completed an electrical engineering degree at any other college, and that’s because I set aside the time to study. It gave me discipline, and really taught me time management.”

A memorable teacher at The Citadel was Walters’ physics professor, who was a veteran of the Battle of the Bulge. Teaching with a cigar in his mouth, he could always be sidetracked by his students to tell war stories of his experiences along the German lines. At the end of class, he would remind his students that the material they were supposed to cover in class was still their responsibility for the test.

Walters’ first leadership lesson outside The Citadel took place at Camp Lejeune, North Carolina. A newly commissioned officer, his first duty station was Third Battalion, Second Marines. It was an 81mm mortar platoon, with a lot of Vietnam veterans. If your training area was less than ten miles from the barracks, you marched out and back. Walters asked his gunnery sergeant which piece of the mortar was the most difficult to hike with, and was told it was the base plate, which was about 55 pounds. Walters carried the base plate out to the field, and then back after shooting rounds. When he got back to his office, he could barely stand. He asked the gunnery sergeant how the troops made it, carrying that plate back and forth. The gunnery said, “Well, they don’t, they actually just pass it off. One carries it for fifteen minutes, and you pass it off to spread the load on the mortar platoon.” Walters then knew to ask the people under him with more experience before tackling a task he hadn’t done before!

Another piece of advice Walters imparted was that in combat and in life there are very few endeavors that you do alone, and so teams are what make you successful. “Even when you’re the first man to walk on the moon. There were hundreds of thousands of people who had to do their job exactly right so Neil Armstrong could step off the lunar lander and step on the moon.”

When asked what inspired General Walters to pursue aviation in the Marine Corps, his first response was “I thought the sunglasses looked cool.” He told the cadets that flying is one thing, but fighting in an aircraft and being able to use your knowledge in combat is much different. “They’re not teaching you to fly just so you can go up in the wild blue yonder and slip the surly bonds of space. All that’s good, but you’re out there either to transport someone, drop a bomb, shoot down another aircraft … you have some purpose.”

Asked for stories about flying experimental aircraft, General Walters’ first tale was of a Cobra helicopter flight to test a Hydro Mechanical Unit (HMU), which squirts fuel into the engines to keep them running. At 10,000 feet and the maximum 4,750 allowed pounds for a Cobra, they pulled the nose of the craft up 40 degrees and stalled the engines. Putting the nose back down, they shut the fuels off, then turned them back on, rolled the throttles up, and by about 6,000 feet had one engine working. By 4,000 feet the other engine was working, and it was time to call it a day.

Another story involved losing an engine of a V-22 while flying across the Atlantic. It was a nine hour flight. About four hours in, at 25,000 feet, they were forced to penetrate a thunder storm and the engine iced up. Pulling out an emergency checklist to restart the engine, they went through the steps and after losing 14,000 feet were able to determine which engine was off and start it back up again. At the bottom of the emergency checklist was a note that read, “Perform the above steps within sixty seconds of flameout, or risk thermal lockout.” When they were safely through the flight, Walters called the program office and asked them to relocate that note to the top of the checklist, and not have it be the last thing you read after finishing the procedure.

Walters’ last story for the cadets was from Yuma Proving Ground in Arizona. “We were qualifying a night targeting system - a little laser system on the front of a Cobra and it was glorious for a test pilot, because I had to shoot 62 Hellfire missiles at targets. We were blowing up everything out there. We ran wild for about four or five days out there, shooting 60 missiles. I enjoyed that.”