The Citadel Archives is the repository for historic material pertaining to The Citadel as an institution.

“What strikes me now is how much of the painful past we have yet to confront, even when we love one another and think that we know one another. So much of what agonizes and divides us remains unacknowledged… We are runaway slaves from our own past and only by turning to face the hounds can we find our freedom beyond them.” Timothy B. Tyson, Blood Done Sign My Name: A True Story

“The Citadel’s mission is to educate our students in a disciplined and intellectually challenging environment, so that they develop into principled leaders instilled with our core values of honor, duty, and respect. Especially in these trying times here in the U.S. and societies around the world, we believe it necessary to renew our commitment to this position by joining the larger international movement of colleges and universities confronting past entanglements in human bondage and racism. The Citadel’s founding is tied to slavery and, like the Universities Studying Slavery, we support the consortium’s ongoing study of that history and its impact on our society today.” Connie Ledoux Book, Citadel Provost (2017) 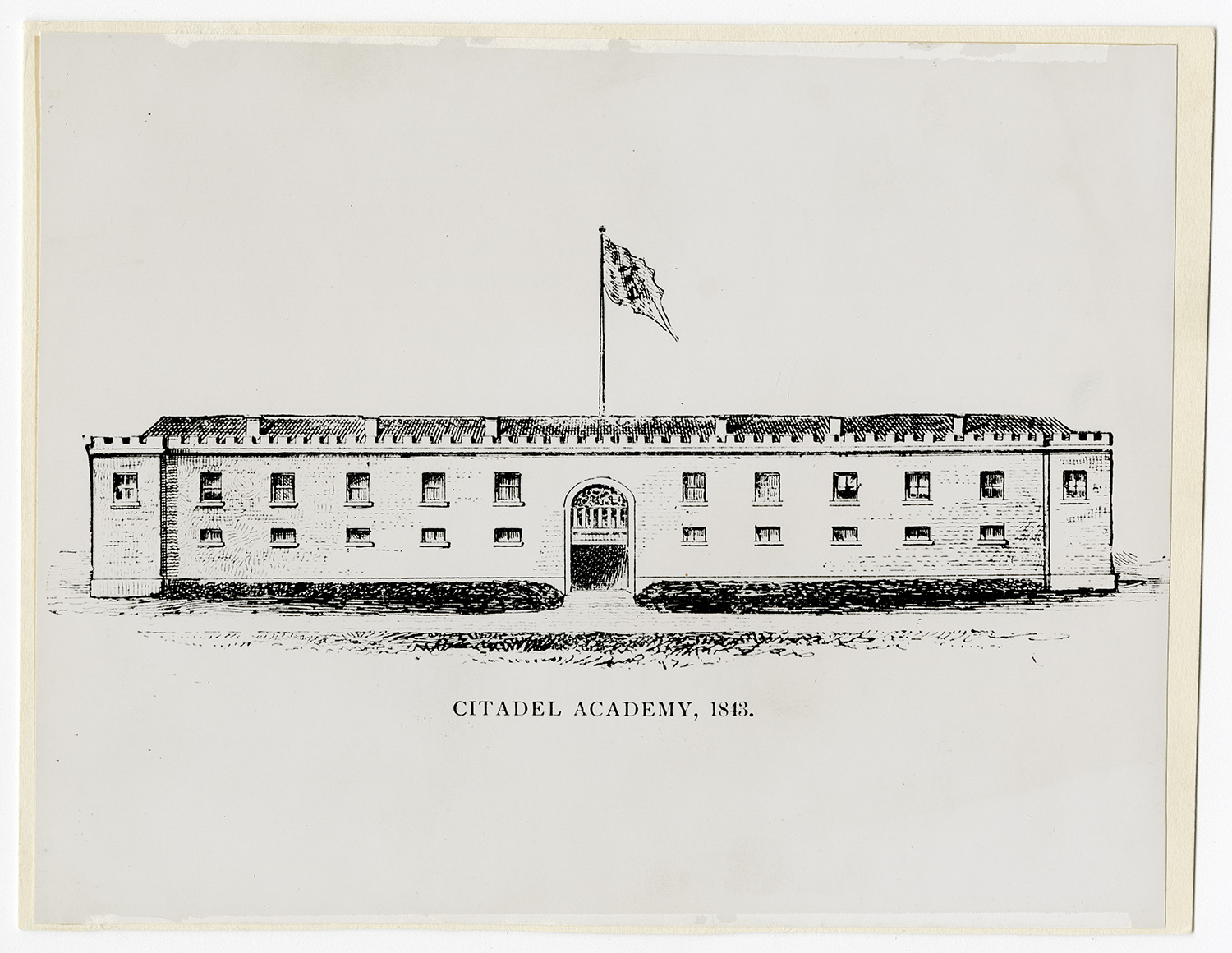 Sketch of The Citadel Academy in Charleston, 1843

In 2016, the President’s Task Force for Advancing The Citadel’s Connection to Diversity and Inclusion observed the need to promote a more comprehensive understanding of “the context in which The Citadel was established in 1842, historical relationships between The Citadel and the surrounding community, and the importance of cultural diversity to the development of Charleston and SC.” In pursuit of this goal, The Citadel, in 2017, joined a consortium of forty Universities Studying Slavery.

Our research efforts are still in their early stages but a general outline of The Citadel’s story is clear. The Citadel is located in the heart of Charleston, a port city through which roughly forty percent of enslaved persons entering North America passed. As such, historians have described Charleston as the “Black Ellis Island.” The Citadel was originally established as an arsenal by the state of South Carolina in the immediate aftermath of Denmark Vesey’s aborted slave insurrection in 1822. Its purpose was to support “a Competent Force to Act as a Municipal Guard for the Protection of the City of Charleston and its vicinity” (City of Charleston Ordinance No. 2276). Twenty years later, it was converted into a military academy whose white students earned a college education while simultaneously safeguarding the weapons stored there to defend the city “in times of alarm, invasion, or insurrection” (Board of Visitors minutes, 1843, p. 10). The school originally had two locations: the Citadel in Charleston and the Arsenal in Columbia, South Carolina. Both campuses operated from 1843, when classes were first held, until 1865, when much of the Arsenal was burned and Federal troops occupied the Charleston location. The Citadel reopened in Charleston in 1882. 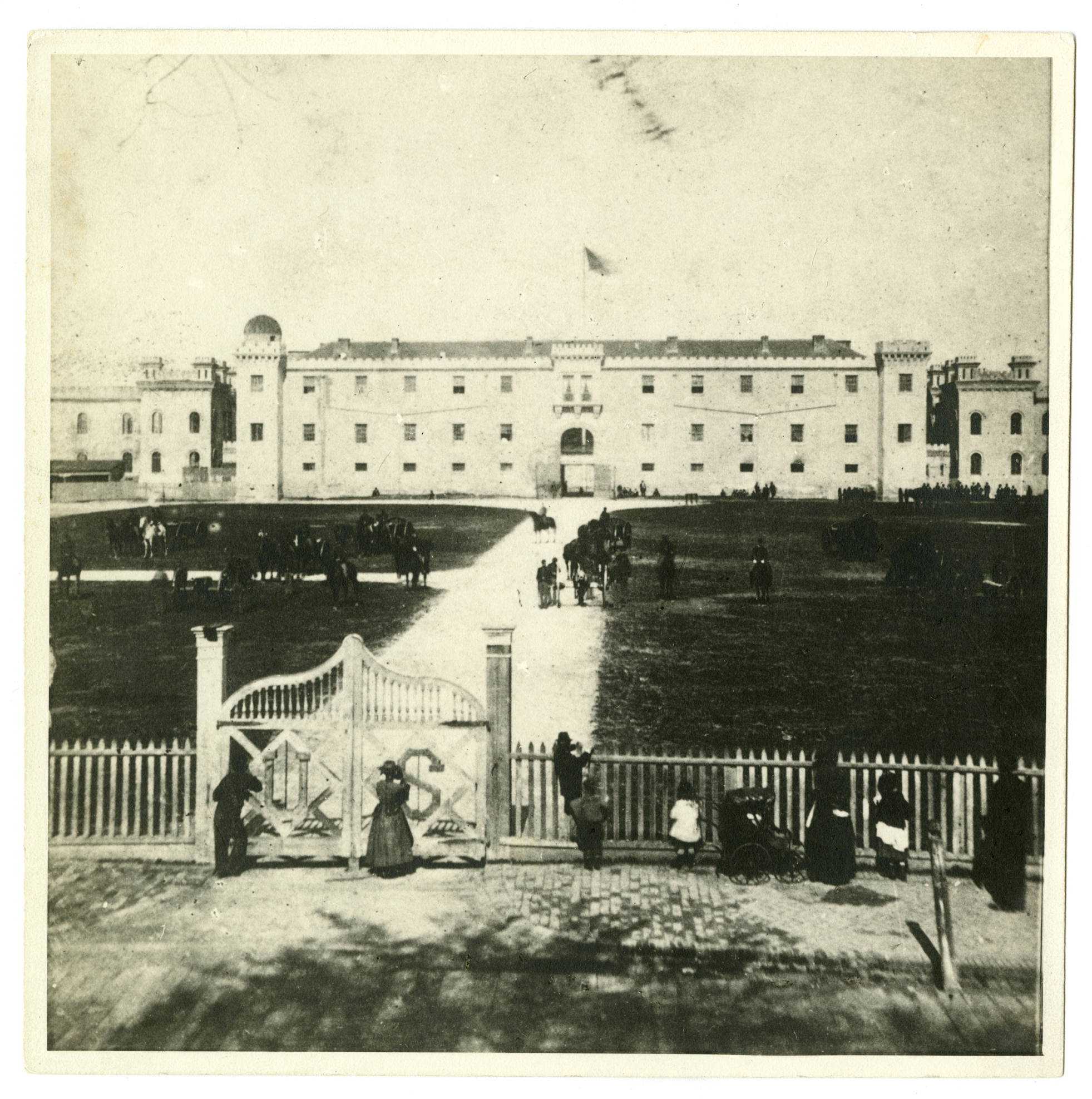 The Citadel under occupation, circa 1870

What was The Citadel’s specific relationship to slavery during those first twenty-two years? The Slave Schedule of the Federal Census of 1850 lists five male black slaves at the Military Academy, a name by which The Citadel was known. Members of The Citadel community, including individual administrators, faculty and students, were members of South Carolina’s slaveholding class. Many of them participated directly in the events that triggered the beginning of the bloodiest war in American history, a war whose root cause was slavery. 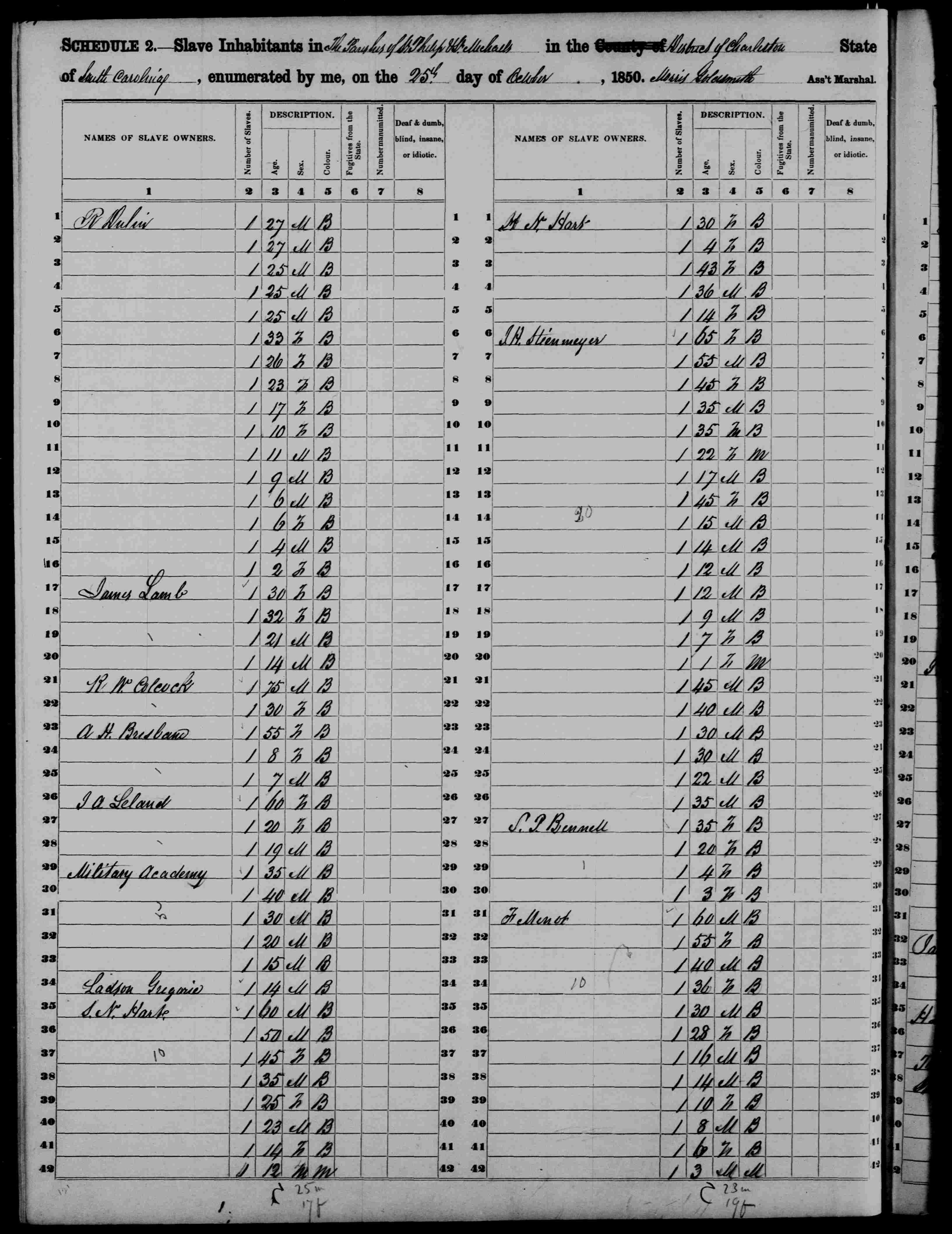 This project seeks more specific information about the lives, thoughts, and actions of individuals who were part of The Citadel community and how these individuals affected and were affected by the peculiar institution. It is our hope that the fruits of this research, which will be shared online, will further the conversation within our community beyond abstractions to a serious consideration of the place of slavery and race relations in The Citadel’s past and the impact of their legacy today. It is also our hope that the combined results of the research conducted by the Universities Studying Slavery consortium will produce a richer, deeper, and more complete understanding of the history of our United States of America.