Posthumously Awarded  the Navy Cross for Heroic Action in Vietnam 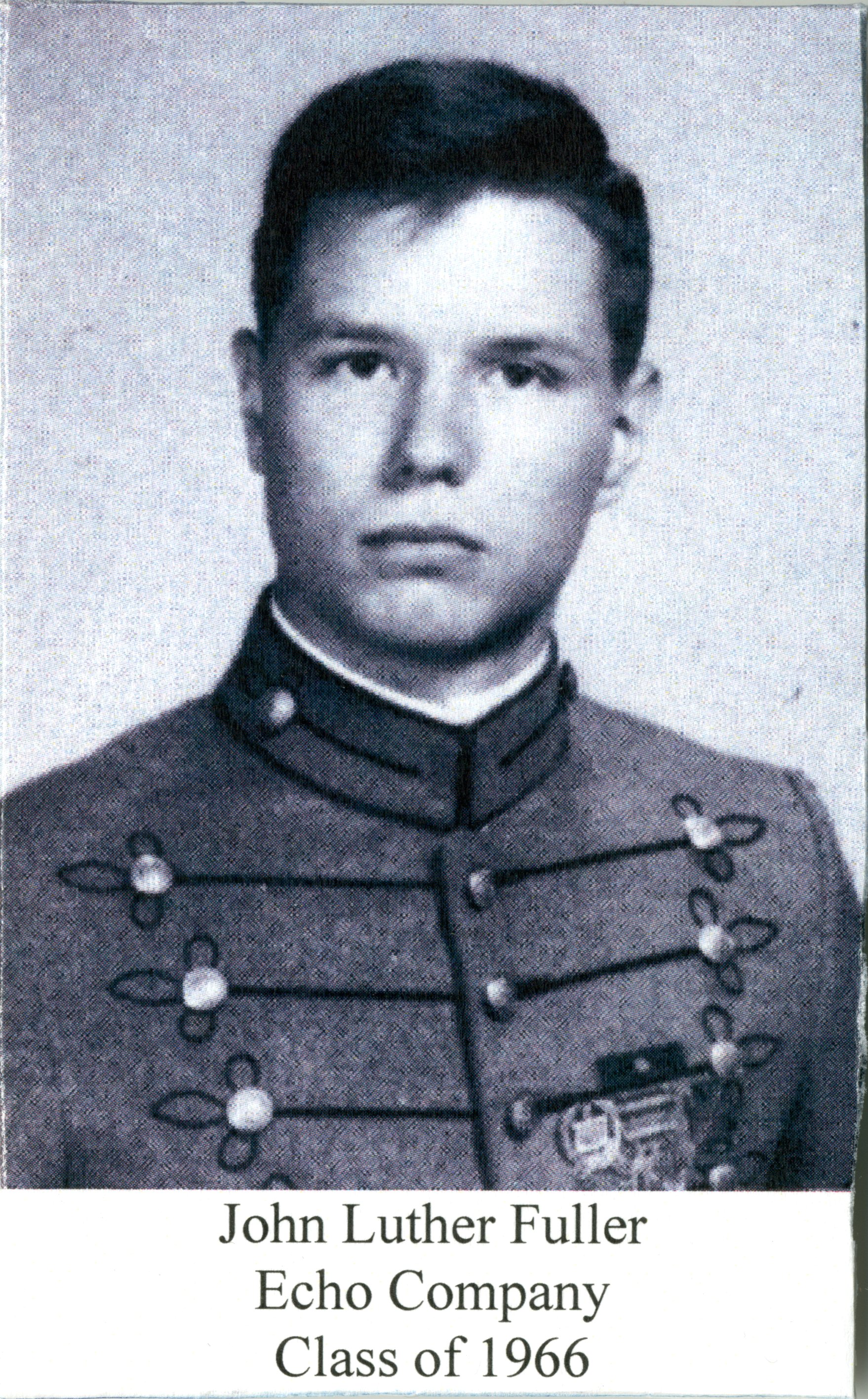 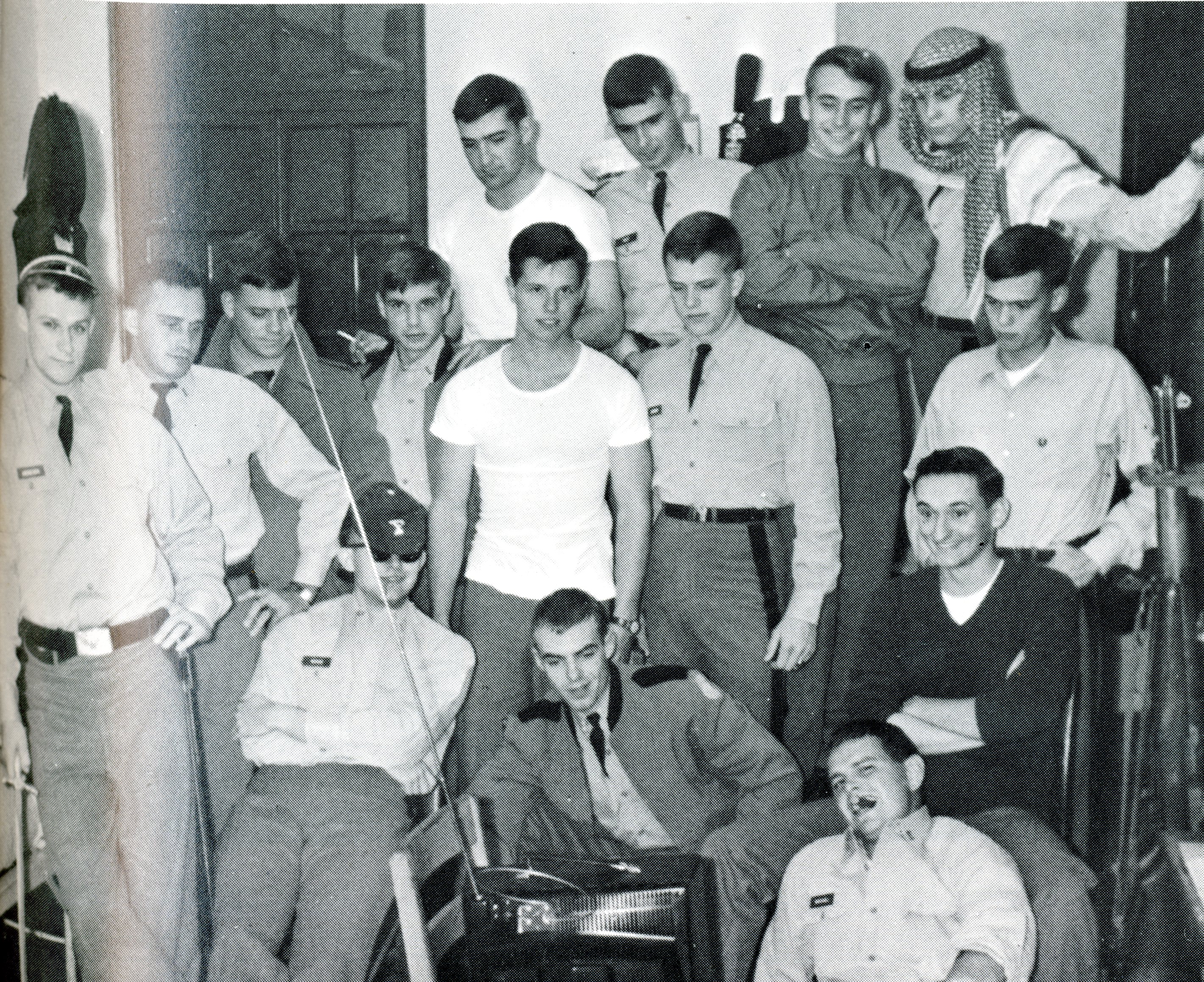 John (Center in white T-Shirt) enjoys time with his

John would graduate in May with his

Bachelors of Arts degree  in History.

John Luther Fuller Jr. born on June 10,1944 in Atlanta Georgia. In August of 1962 John reported to The Citadel and began the rigors of the forth class system.The 1966 Class history would chronicle that first trying year, “Months passed by, but we were not yet upperclassmen;we were not yet  Citadel Men. We were Knobs—a name reserved for opening doors and for us. Time dragged on; studies piled up; upperclassmen shouted louder – we became immune. Our class became a close family as we shared the common problems of the Plebe  Year.” John and his classmates matured through their first, second, and third year struggles. Senior  year, John had risen to the rank of Cadet First Lieutenant and served on Echo Company Staff.  John graduated from The Citadel on May 28, 1966.

Upon graduation John immediately reported to Marine Corps officer school in Quantico,Virginia. Five months later, John graduated fourth out of a class of 200. He volunteered to serve in Vietnam.  On March 23, 1967 John was leading his unit, Third Platoon, Company E, Second Battalion, Fifth Marines,First Marine Division. During Operation New Castle, John's unit was ordered to maneuver towered the fortified village of Dai Khuong 1, Quang Nam Providence. During the maneuver John's platoon came under heavy enemy fire. John was wounded twice while attempting to reach the platoon's radio; he was killed during his third attempt. 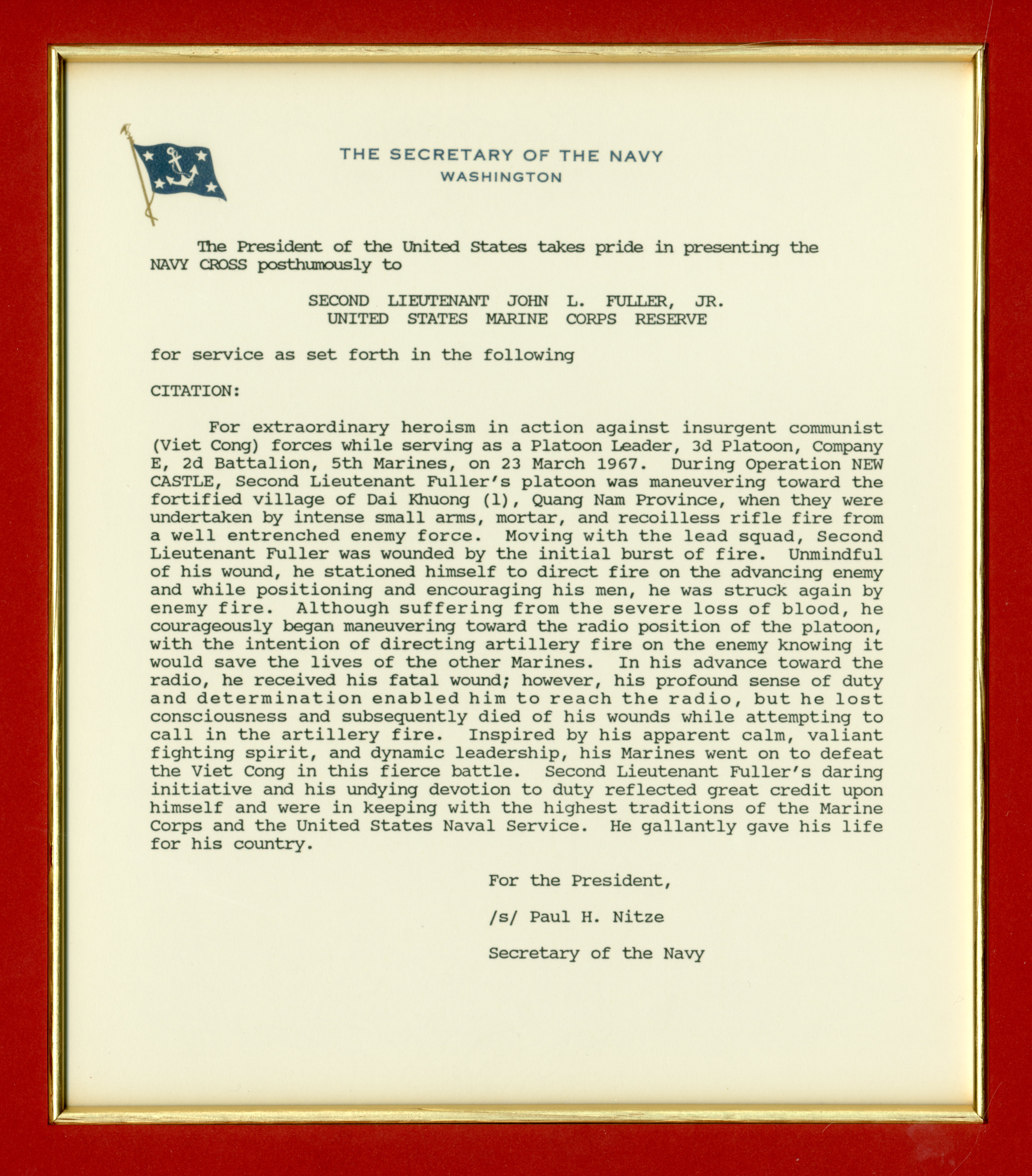 a larger version of John's citation in a new tab.

In 1987,  the City of Atlanta dedicated a memorial in John's honor. Here they unveiled a portrait of John which today hangs amongst other distinguished Citadel Alumni in the Daniel Library. The ceremony was complete with military band and honor guard. Among the crowd of people stood John's family and his classmates.

“John was quite,not wordy. Pleasant, fun to be with, warm, sensitive, talented, intelligent, he always greeted you with a friendly smile. He was demanding on his plebes at The Citadel, but we really enjoyed when he played his banjo for us. John was the quintessence of a Citadel Man. An outstanding member of the Class of 1966. He held the respect and admiration of his classmates. He was an excellent student and a fine athlete. People at The Citadel respected John because he was a man who believed in his convictions. John was the type of person who went after what he wanted. As long as I can remember, John wanted to be a Marine. He went about this goal in a sincere, determined manner.  John joined the Marine Corps Reserve while a junior in high school. At The Citadel he entered the Marine Corps Platoon Leader Course. He was president of the Semper Fidelis Society. His driving ambition at The Citadel was to become a Marine Corps officer. John Fuller was a man; he knew he might die when he volunteered for Vietnam, yet he did volunteer. He was a young noble warrior, idealistic, naive, innocent, he never expressed fear. He was a likeable kid who grew up next door to become a solider during a time of war. And a soldier’s solider he was. He was frequently in the first helicopter that came in to the landing zone and almost always the last one on the last helicopter coming out. He usually positioned himself close to the lead element of his platoon. He was moving with the lead elements when he was wounded so many times. Lieutenant Fuller was a leader, daring and compassionate. He would never tolerate the mistreatment of civilians or the use of drugs. We all respected him and obeyed his orders. Many gave their lives or were wounded trying to get to him the day he was wounded. He was an ace, we loved him dearly. His death is a great loss to everyone who knew him. May The Citadel forever produce sons like him.”