This guide includes biographical information about Major James B. White, Superintendent of The Citadel, 1861-1865. An event sponsored by the Cadet Museum Committee was held on December 6, 2016. The video and photographs from that event are included in th 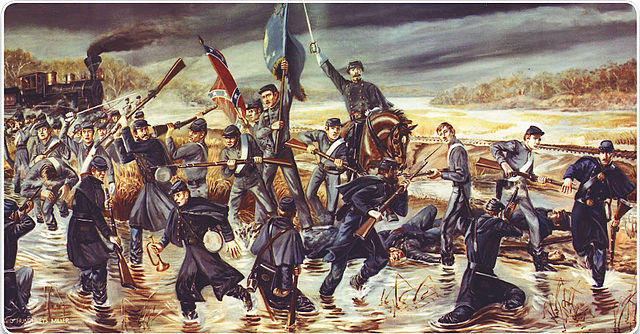 Mural of The Battle of Tulifinny by David Humphreys Miller located at the Daniel Library, The Citadel, Charleston, SC

It has been my honor to work at Daniel Library the last nine months. Studying and archiving Citadel history has been an extraordinary experience. However, it’s events such as this that make me proud of my soon to be Alma Mater.

Today, we are here to commemorate the example that was set forth by Major James B. White, Citadel Superintendent from 1861 to 1865. Major White’s impact on this institution is profound and still resonates to this day as he embodied the roles of Soldier, Scholar, and Educator. Beside me, stands the portrait of Major White, which was unveiled in 1960 and normally resides in the President's office alongside the portraits of past Citadel leaders. We are also honored to have the great- grandson of Major White here tonight, Mr. Hugh White, III, Class of 1960.

James Benjamin White was born in Georgetown County, South Carolina in 1828. Born to a prominent family, J. B. White was groomed to attend college by his father.  In 1845, at the age of 17, J. B. White matriculated to the Arsenal Academy in Columbia. After he completed his freshman year at the Arsenal, White continued his studies in Charleston at the old Citadel on Marion Square. White Graduated from The Citadel Academy with a degree in Mathematics in 1849.

After graduation, White continued his service to The Citadel, teaching math at the Arsenal campus in the early 1850s. Within the decade White had become a full time professor at the Citadel Campus. In 1861, state legislation was passed which established the “Officers and students of The Citadel and the Arsenal as a military corps entitled The Battalion of State Cadets,” In 1861, when Major White became the superintendent of the college at the age of 33, he in turn became the commander of The Battalion of State Cadets. 1861 also saw The Citadel cadets serve proudly in their famed Star of the West engagement as well as the Confederate siege and capture of Fort Sumter. Quickly, White’s responsibilities grew as he became responsible for not only producing college graduates; but also battle ready soldiers.

On more than one occasion, the cadets under the command of Major White were asked to deploy to military conflict around Charleston. Early on, the cadet forces were essentially used to construct forts and mount heavy guns. Once the battle preparation were completed, the cadets were sent back to school, where they resumed their studies. However, this arrangement did was not well received by the Corps.  The cadets knew that Charleston was under threat and they wanted to come to her aid. Soon, Major White was faced with a leader's nightmare as 36 of his cadets deserted The Citadel to join the Confederate army. The effect that the 36 had on the remaining cadets was profound.  Soon many more wanted to follow suit and because of this, Major White intervened. Addressing the cadets directly, Major White expressed eloquently, the importance that they played in conflict. Like all great leaders, Major White was able to understand the sentiments of his men. He recognized their desire to serve and worked to achieve that desire. He explained the expectations that he had for the Corp and he inspired his cadets to not only meet, but exceed those expectations. Thanks to Major White’s devotion, respect, and charisma towards the cadets; the Corps returned to their duties with renewed passion.

The respect that the cadets had for Major White became paramount during the Battle of Tulifinny.  The Major commanded a force of both Arsenal and Citadel cadets. Under his direction, an early leadership laboratory that, in a sense is still practiced today, was implemented as the elder cadets of The Citadel acted as the leaders and drillmasters for the younger cadets of The Arsenal. In all, under the exceptional leadership example that Major White set forth, the Battalion of State cadets, comprised of 15 to 22-year-old men, were able to repel an attack from a superior Union force.

The conclusion of the Civil War saw the discontinuation of both the Arsenal and Citadel academies. The Arsenal Academy in Columbia had burned to the ground during General Sherman’s march to the sea, while the Citadel campus on Marion square became a billet for union troops during the reconstruction era. Major White, along with other graduates, lobbied for their school to be reopened.  Thanks to Major White’s continuing devotion to The Citadel, as well as his passion for learning, The Citadel was reopened at her original campus in 1882.

In all, Major White proved to be an extraordinary leader given the unique conflicts he was charged with leading. Major White was a graduate, a professor, and a leader of his beloved institution.  He became, and will remain, the only commander of the Battalion of State Cadets. Even after The Citadel had closed its doors, Major White’s loyalty to the Corps did not waiver. Major White’s legacy was continued here at The Citadel as his son, George Walker White, graduated in 1904.  His grandson, Richard George White, graduated as a member of the class of 1938. His great-grandson, Hugh Walker White, III, graduated with the class of 1960. As General Clark said at the presentation of Major White’s portrait, “Few Citadel families can boast as many connections with this institution as can the White Family.  We are proud of their record.” Today, we are reminded of the admiration that the Citadel Corps of Cadets has for its past leaders.

Mr. White, on behalf of The Citadel Corps of Cadets, I would like to thank you for your generous donation of the Major’s epaulets and the daguerreotype of the Major and his brother.   As a Cadet, I can promise you that these items will be cherished by the Corps, as they represent the rich history of our beloved institution.  Thank you, sir.